The “FALLAS” of Valencia is a traditional celebration held in commemoration of Saint Joseph in the city of Valencia, in Spain (celebrated the 19th of March, but with different activities around this date). A number of towns in the Valencian Community have similar celebrations inspired by the original “Fallas de Valencia” celebration. The origin of this festival dates from the middle age. Previously, Valencian carpenters used planks of wood called parots to hang their candles on during the winter, as these were needed to provide light to work by. With the coming of the spring, they were no longer necessary, so they were burned. Over time, and with the intervention of the Church, the date of the burning of these monuments was made to coincide with the celebration of the festival of Saint Joseph, the patron saint of carpenters. 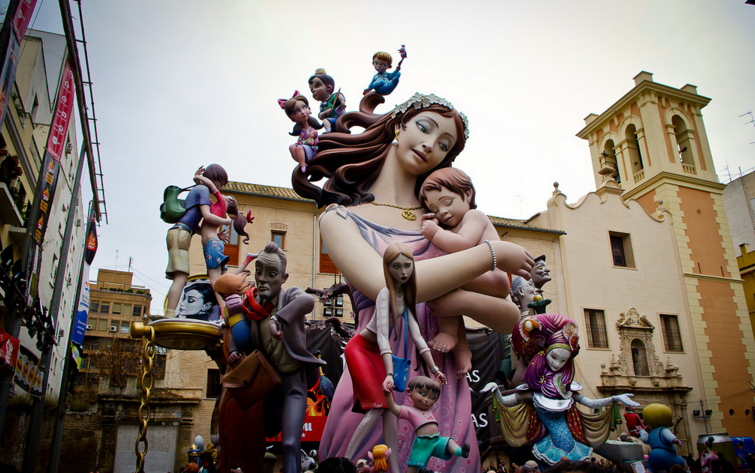 In Fallas, every street of Valencia is decorated  with colorful lights. In Valencia there is a street called “Calle de Cuba”, which is decorated in a  extremely beautiful manner. It shows movements of lights synchronized with the music rhythm. It is recommended to be visited by all tourists and International Students to see. 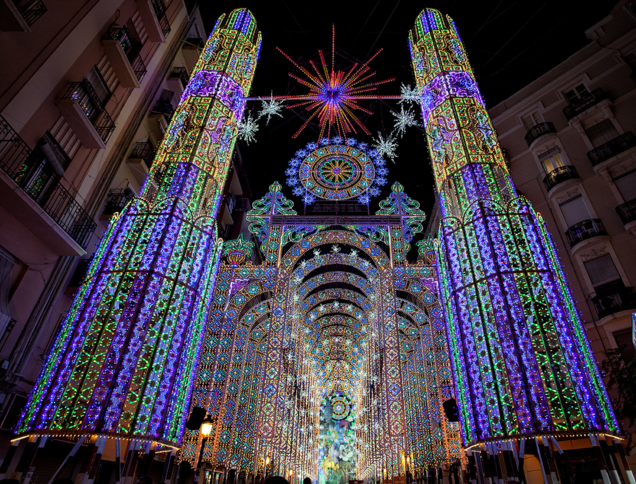 Moreover, a broad number of events take place during Fallas. The Mascletà, is a firework of firecrackers, display every afternoon of the days of Fallas at 2:00 pm in the Plaza del Ayuntamiento of Valencia. The Mascletà is really impressive. Every year the Fallas attracts not only national but also many other tourists and International Students. Thus every year millions of people across the world visit Valencia in Fallas. 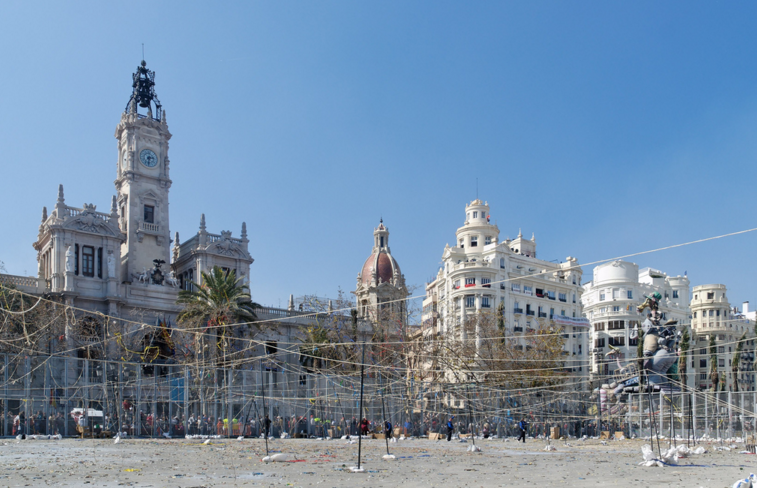 Moreover, there is another  firework display at night. It is a little bit different from Mascletà. Perhaps more impressive than Mascletà. It is displayed  in the old riverbed. Like Mascletà, a huge number of people gather for this Fireworks. 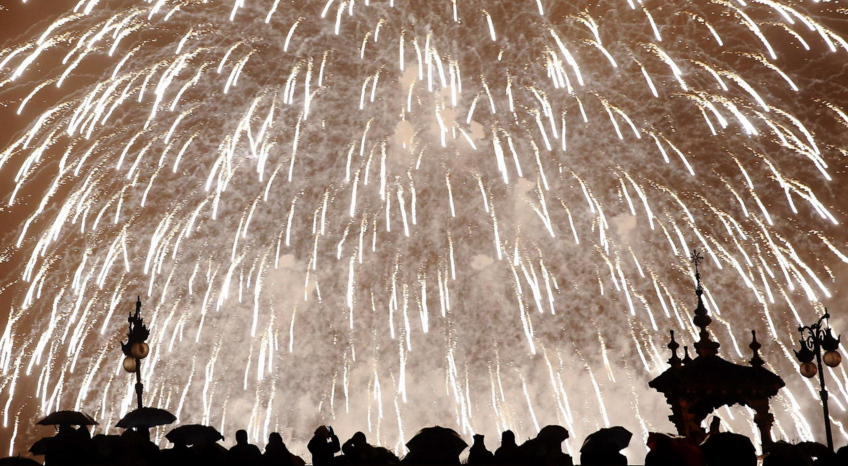 In Fallas, the whole city is decorated by huge monuments. Basically, we would find two types of monuments around the city. The “Falla infantil” is made for infants without any critical themes and the “Falla Mayor” which has a critical nature. At the last day of Fallas, they announce which is the best Falla in all over the city and award the correspondent artist. The parades of Fallers take place in their traditional dresses. These dresses also take attention from visitors for being unique. 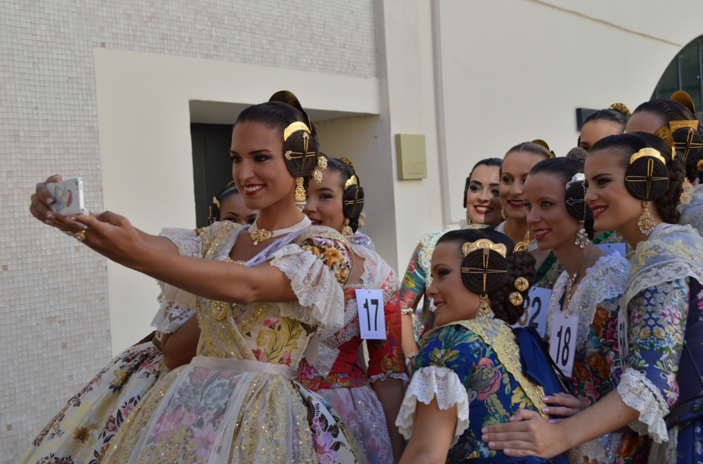 In Fallas, on every corner there are stalls selling traditional sweets such as “churros and bunyols”. They are one of the most common festive sweets of Valencians, normally eaten with melted chocolate or sugar.

At the last day of Fallas, all the monuments are burned. The moment of burning such beautiful artefacts is so sad that makes everyone cry. The monuments situated in each town are burnt first and those of the city hall in the last, indicating the end of the festival. 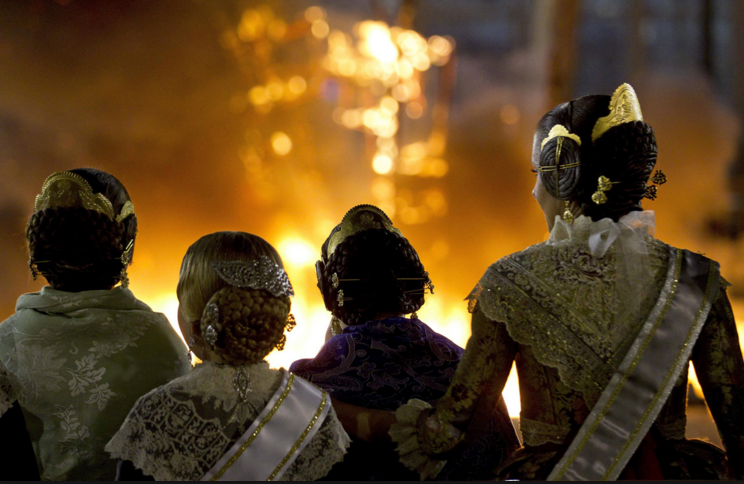 Hope you enjoy your time at the Fallas!

At 14:00
MASCLETÀ in the City Hall.
At 17:00 hours
Closing of the Exhibition “NINOT”.
At 18:00 hours
official announcement of the results of votes and proclamation of the Ninot Indultat (Best Falla, selected and saved from burning this year and placed at the Museum).
At 18:15 hours

Collection of the ninots by all the commissioners of Fallas.
At 00:00 hours
FIREWORKS, on the Passage of the Alameda (Paseo de la Alameda).

The distribution of awards won by the Children’s Fallas in different sections, as well as presentations, cribs, Cavalcade of Child and llibrets Ninot of Fallas installed, in front of the City Hall.
At 22:30
In front of the main facade of the City of Valencia, Music, Balls, i Cançons Tradicionals Valencianes, in collaboration with the Federation of Folklore of Valencia.
A 01:00
FIREWORKS, on the Paseo de la Alameda.

March 17, 2016
At 09:30 hours
On the platform in front of the City Hall, distribution of awards won by the Fallas in different sections, as well as for the concepts Ninot Parade, Contest Decorated and lighted streets, Presentations and llibrets Fault installed.
At 14:00
MASCLETÀ in the City Hall.
At 15:30 hours
Offering of flowers to the Virgin of the Helpless (Virgen de los Desamparados).
At 1:00 hours
FIREWORKS, on the Passage of the Alameda (Paseo de la Alameda).

March 18, 2016
At 11:00
Tribute to the poet Maximiliano Thous, at his monument, located at the crossroads of Sagunto streets Maximiliano Thous, with the special collaboration of Fray Pedro Vives Falla – Bilbao – Maximiliano Thous.
At 12:00 pm
Tribute to Maestro Serrano, to be held at the monument dedicated to him in the Avda. Reino de Valencia.
At 13:30 hours
Pre mascletà by the Dinamic Animation Production Group.
At 14:00
MASCLETÀ in the City Hall.
At 15:30 hours
FLOWER OFFERING TO OUR LADY OF THE HOMELESS (La Virgen de los Desamparados), in the following order and times:
At 1:30 hours
“NIT DE FOC” in the Paseo de la Alameda. Pyrotechnics Focs d’Artifici Europlá.

March 19, 2016
At 11:00
At the Bridge of San Jose, The Falleras of Valencia and Courts of Honor make an offering of flowers before the statue of the Patriarch.
At 12:00 pm
Mass in honor of the Patriarch San José in the Cathedral of Valencia, celebrated by His Excellency Archbishop of Valencia, Monsignor Carlos Osorio Sierra, offered by the Central Board of Fallera and Artists Guild Carpenters, with the assistance of the Falleras from all over the Valencia and their Courts of Honor.
Mass sung by the Cathedral Choir and Orchestra of the Conservatory Jose Iturbi.
At 14:00
MASCLETÀ in the City Hall.
At 19:00
PARADE OF FIRE with the following schedule: Departure Ruzafa Street, Columbus, ending at the Porta de la Mar (Puerto del Mar).
At 22:00
CREMÁ (Burning) of the Children Fallas.
At 22:30
Child Falla CREMÁ (Burning) having received the first prize of the Special Section.
At 23:00 hour